December 24, 2015 was a chilly, foggy night. Larry, Tom, Jory and I were driving home from church when we turned the corner a block from our house. Tom was driving and saw a tiny kitten scoot across the road following an older cat.

“Did you see that?” he asked. None of us saw the black kitten. Tom stopped the car and lowered the window. We could hear the pitiful cry of the kitten. We got out of the car and walked around the wooded area where the cries were coming from. There was the kitten in a pile of brush. Nearby was a dead cat. Another older cat (about six months old) stood near, watching but would not approach us.

I gently picked up the kitten whose little body fit in the palm of my hand and held her against my chest. She was trembling from the cold. By the time we reached our home the kitten had stopped shaking. Inside in good light, I could see that she was about 3 weeks old. Her eyes still had that kitten just opened blue-gray color. Fortunately I had some small cans of wet cat food left over from my cat. I put the food in a dish and put it in the box with the kitten. She did not know how to eat or what it was. Gently, I took some of the food and put it on the end of my finger and touched it to the kitten’s mouth. She licked the food off of her face and after two tries, literally dove into the dish of food with her two front feet and face. She ate almost the whole thing.

Later I eye dropper fed her some milk and water which she readily took. Of course Tom and Jory kept asking me if I was going to keep the kitten. I told them I could not because of the dogs. Although my Parson’s Russell Terrier, Riley, was raised with a cat, our new Border Collie puppy Babs, was not. I did not think I could keep the kitten safe from the dogs. I fully expected Babs to want to play with the kitten and could injure or kill her with rough play.

The next day, as hard as it was, we took the kitten to our local humane shelter (Humane Society of Carroll County, Inc. Westminster, MD) which does a great job finding homes for them. They even have programs to socialize their cats. We were lucky that someone was at the shelter to take the kitten for us.

I stopped by the shelter to see how the Christmas kitten was doing. Much to my delight, they had a mother cat who is nursing the kitten, along with another little older kitten. Although she was in the quarantine area and I could not see her, I knew that taking her to the shelter was the best thing for her. They confirmed that she was barely three weeks old. She is so cute that I know she will get a forever home. 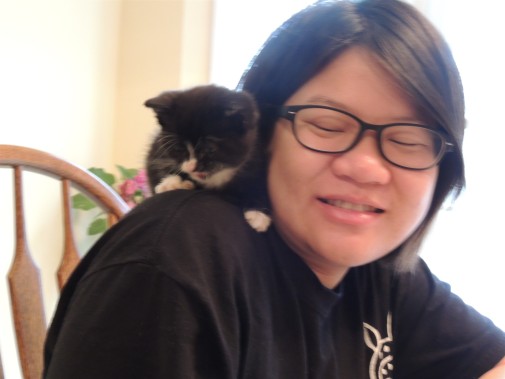 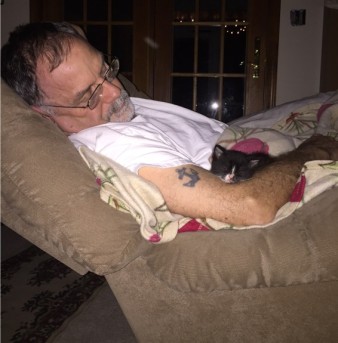 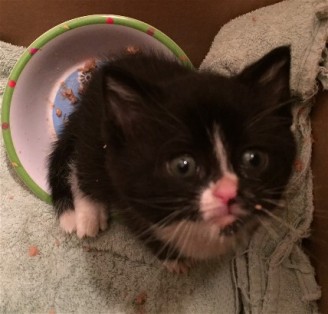