Breeders of Airedale Terriers in Finland sent the bodies of dead newborn puppies for examination to the Finnish Food Authority. At Evira, Professor Marjukka Anttila uncovered a problem in the puppies’ lungs. What they found was a defect in the LAMP3 gene that affected the puppy’s ability to breathe due to a failure in the lining of the lung. 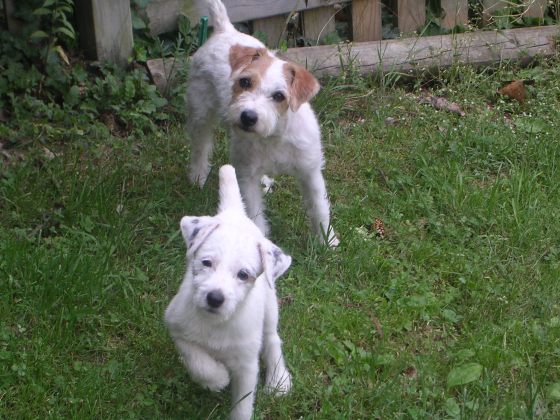 These are not Airedales. I couldn’t get a photo of one. Dog in the foreground is my Riley as a pup with his mother.  Parson’s Russel Terriers

After this discovery almost 7,000 dogs that included 300 different breeds were screened for the gene defect. However, it was only found in the Airedale Terriers. The researchers did discover that 1/5th of Airedale Terriers carried the defect.

The good news is that breeders can have a genetic test performed to determine if their dogs have the defect, thus preventing the spread. With total cooperation between breeders, eradicate the defect.

Researchers have said “As the LAMP3 gene has not previously been associated with diseases, in the future its role in the breathing difficulties afflicting newborn babies should be investigated.” This could be another case where a canine issue leads to a cure for humans. If this genetic defect is in 1/5th of Finnish Airedales, it may be in the breed worldwide.